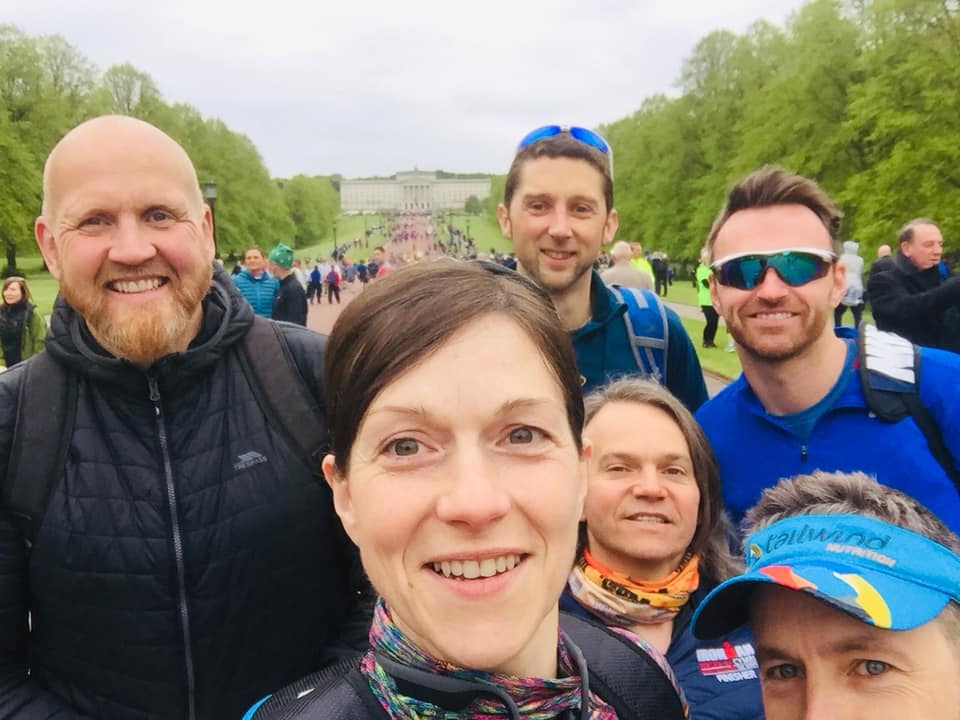 Belfast entertained the Riada TC train on Sunday morning. Mark, Simon, Davy, Claire, William, Karen, Eddie, Marshall, Janine, Paul, Richard and Elaine all queued at the platform for the 0900 express to Ormeau Park. Mark, a recent victim of double parenthood, packed his newfound lightweight body into the driver’s seat, blew the whistle and set off at Express pace. William, Richard, Simon and Paul flashed the First Class tickets and settled into the journey with fine wines, canapés and snacks, watching the miles go by fast and effortlessly. Country-birds Janine, Karen and Elaine had to settle for economy class. Harder seats and less extravagant food resulting in a more uncomfortable ride, tired limbs and needing some special assistance when exiting the train at the finish. Claire, having purchased a First Class ticket to enjoy the luxuries of her fellow teammates in the carriage, was adversely affected by the swaying of the train and decided to get off the train early, to spend her emergency money, in Debenhams Bank Holiday sale. Eddie and Marshall could only afford Cattle class, likened to “Jack” in the feature movie “Titanic” and had to work for their passage by shovelling coal and cleaning the toilets. The duo, more akin to short yardage at Ballymoney Rugby pitch, knew the day would be long and sore. Finishing to a somewhat less spontaneous crowd, rumours soon spread that Mr President was already home in Coleraine eating lunch! With the McAvoy family purse firmly in Claire’s grasp, Davy was left to chase the train with no ticket allowed, in the hope of catching it as it stopped at the stations and begging his way on. As Mark drove the locomotive at a fast pace, testament must go to Davy for nearly catching the train after passing 3350 other chasers! Riada TC had an awesome day out at the marathon. Big thanks to the organisers, the supporters and to the overall carnival atmosphere from the people of Belfast. Maybe see you next year!